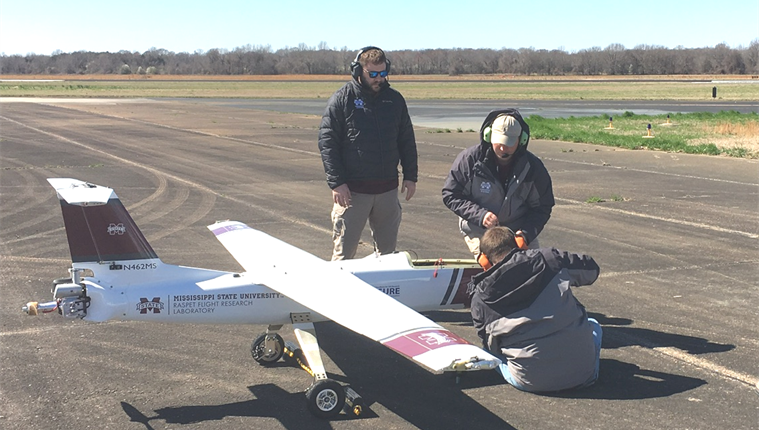 [NOAA] As the Yalobusha River rose around Greenwood, Mississippi, during a major rainstorm in late February, scientists from the Northern Gulf Institute at Mississippi State University deployed a small unmanned plane that took high-resolution images of rising waters and beamed them back in real time to NOAA weather forecasters.

“We were able to see the water as it rose over the course of two days, which helped our office confirm when the crest had been reached,” said Dr. Suzanne Van Cooten, hydrologist-in-charge at the NOAA National Weather Service Lower Mississippi River Forecast Center in Slidell, Louisiana. “This visual information really helps us improve our forecasts so we can provide critical information to those in an affected area.” 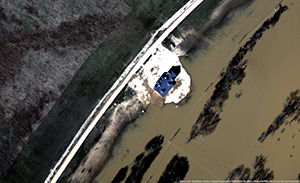 This image captured by the unmanned plane on Sunday, Feb. 24, at 1 PM, shows rising waters near a house.
Photo by David Young and Logan Renz, NGI,
Mississippi State University
Real-time images for NOAA and FEMA

The images were transmitted to the High Performance Computing Collaboratory at MSU, and could be immediately downloaded by NOAA’s NWS Lower Mississippi River Forecast Center. NOAA forecasters used the information to refine forecasts that are vital to local emergency managers, the public and the area’s farmers.

In a parallel effort, the data was also downloaded by the Federal Emergency Management Agency Region 4 for real-time examination and assessment. “Aerial imagery and other data made available from unmanned aircraft systems is increasingly showing its value as a resource to provide our local, state, and federal emergency managers with actionable information needed to most effectively perform their duties,” said Travis Potter, Remote Sensing and UAS Coordinator for FEMA 4. “The information provided from this operation could be extremely useful toward helping folks on the ground to efficiently distribute resources, manage evacuations, and aid in future recovery efforts.”

Once the plane landed, scientists retrieved higher resolution images stored onboard that can now be used to improve flood prediction models. 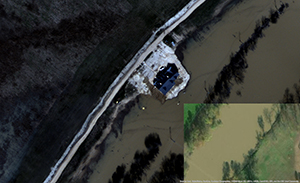 This image captured by the unmanned aircraft a day later on Monday, Feb. 25, at 11 AM, shows waters rising around the house.
Photo by David Young and Logan Renz, NGI,
Mississippi State University
“We’re really pleased with the results of this fixed-wing unmanned aircraft system,” said Capt. Philip Hall, director of NOAA’s Unmanned Aircraft Systems Program. “The unmanned aircraft and payload show great potential to provide forecasters with valuable data to improve forecasts as well as flood models. We look forward to continuing to work with the Northern Gulf Institute and NOAA’s National Weather Service to transition the technology into operations.”