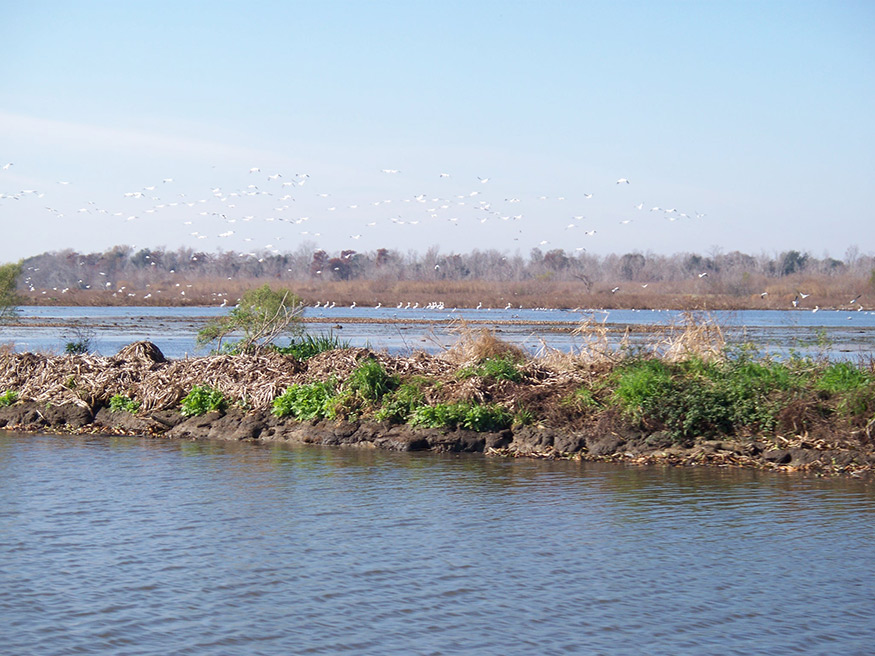 The National Academies of Sciences, Engineering, and Medicine and the organization's Gulf Research Program recently announced that the MSU project is among five newly funded projects focused on enhancing environmental restoration outcomes, along with two others focused on improving information about public health risks resulting from oil spills.

Brian Davis, associate professor in MSU's Forest and Wildlife Research Center, is lead project investigator and working in collaboration with Ducks Unlimited and the Louisiana Department of Wildlife and Fisheries.

The project, titled "The Efficacy of Marsh Terraces in Enhancing and Restoring Gulf Coastal Wetlands," is receiving an $852,386 grant from the National Academies, and MSU researchers hope their findings will help reverse the loss of wetlands along the Gulf of Mexico, which are disappearing at an alarming rate. A 2013 report by the U.S. Fish and Wildlife Service and the National Oceanic and Atmospheric Administration showed wetland area declined by 360,720 acres in the U.S. between 2004 and 2009, with 71 percent of the loss occurring in the Gulf of Mexico. 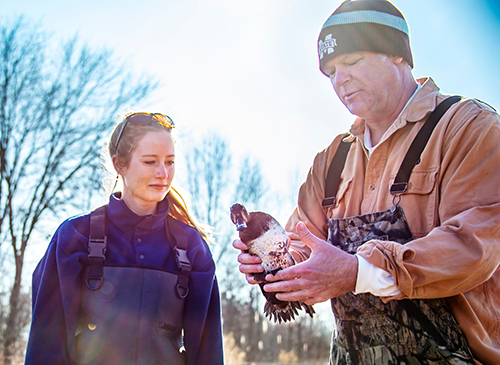 Brian Davis, right, shows Chelsea Gilliland, an MSU graduate student in wildlife, fisheries and aquaculture, how to tag and release waterfowl at the Sam D. Hamilton Noxubee National Wildlife Refuge.
Photo by David Ammon
The award comes through a funding competition that "was specifically geared toward projects that would bring researchers and practitioners together to transfer knowledge and work jointly on efforts that advance both science and its application," according to the National Academies.

Marsh terraces were first implemented in 1990 and have become a popular tool to restore wetlands along the Gulf of Mexico.

With the cost of terrace installation reaching into millions of dollars, the project is expected to provide improvements to future restoration efforts by determining the most effective terrace design for longevity and efficiency.

To determine the study site, researchers will randomly select from the 80 marsh terrace locations that have been constructed in Louisiana and Texas over the last 18 years. These sites will be evaluated and compared to non-terraced sites.

"By comparing terrace sites to non-terraced sites, we can better interpret restoration response," Davis said. "We will use several tools to measure marsh terrace restoration outcomes and identify factors that contribute to their effectiveness."

Wave energy, the amount of sediment in the water, size, shape and spacing of terraces and bird usage are just a few of the metrics scientists will record in order to determine the performance of these manmade structures.

Once these data are collected, hydrodynamic models will be constructed to determine the best marsh terrace design for restoration of wetlands.

"The ultimate goal of this project is to develop best management practices for marsh terrace design for engineering and construction plans. The hydrodynamic models will allow us to determine how future terraces will perform and persist," Davis said.

"With these tools in hand, we will be able to maximize coastal restoration, sustainability and ecosystem productivity," Davis added.