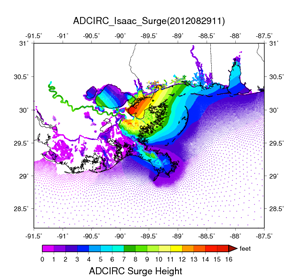 While Tropical Storm Isaac approaches and hurricane warnings are being issued for portions of the northern Gulf Coast, Mississippi State University researchers are preparing 12-hour models to forecast storm surge from Isaac that will inundate the coastal areas in its path. This information will be of significant assistance to decision makers of disaster agencies and others who are advising the public of emergency preparedness plans for sheltering in place or for potential evacuations.

The models are being run by a team of scientists under the direction of Pat Fitzpatrick, research professor of meteorology and MSU hurricane expert. He is known for his research publications that include the reference book Hurricanes (2nd edition). Fitzpatrick's team is located at the MSU Science and Technology Center at Stennis Space Center in Hancock County. The storm surge models are generated from the ADvanced CIRCulation (ADCIRC) model, a hydrodynamic model requiring a supercomputer to capture high-resolution features. The track and winds are based on the official National Hurricane Center forecasts.

Fitzpatrick's data for winds is designed to capture the horizontal distribution out to their 39-mph extent (tropical-storm force). "Capturing the horizontal wind distribution is just as important as getting the track and intensity right," he explains. The large-capacity model runs are an example of the computational services being provided by the university's High Performance Computing Collaboratory (HPC2), which is located in the Thad Cochran Research, Technology and Economic Development Park in Starkville. The Geosystems Research Institute at Stennis, where Fitzpatrick is based, is one of six member centers of the HPC2 that are able to take advantage of MSU's high performance computing resources.

"Not only does Dr. Fitzpatrick's technology assist decision makers with hazards response and evacuation plans, it might also assist with other research projects, such as helping to determine how freshwater inundation affects oyster beds," said GRI Director Robert Moorhead. The storm surge model effort is part of a larger research collaboration, Moorhead added. As a member of the NSF-funded Northern Gulf Coastal Hazards Collaboratory, MSU is working with Louisiana and Alabama to leverage partnerships, proximity and significant prior ventures to advance science and engineering of coastal hazards across the northern Gulf of Mexico region.